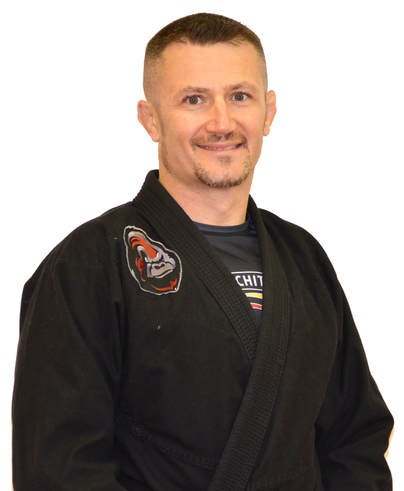 Shawn Chitwood began his martial arts training in 1980. In his 30+ year tenure, he has achieved six different black belts, three national titles, and one world championship title. He has inspired and improved lives of tens of thousands of students in his academies through various martial arts and fitness programs. Read more on his martial arts background at www.teamchitwood.com.
Shawn has worked in law enforcement since 1995 as an auxiliary officer or special deputy where he has received many commendations for his work while on duty. These awards include multiple times as Auxiliary Officer of the Year and Special Deputy of the Year. He is widely recognized for his ability to bring tactical expertise to law enforcement to increase effectiveness and safety. He currently serves as a special deputy for Richland County Sheriff’s Office.  On duty, Shawn Chitwood has engaged in nearly every level of force. Most trainers teach from the viewpoint of “let’s pretend this happens” but Shawn’s experiences as a civilian, former pro fighter, and auxiliary law enforcement officer allow him to teach from the “when this happens” point of view. Real-life experiences are the backbone to the simple, practical, and effective systems that he builds for his clients.
Shawn has provided more than 25,000 hours of instruction. He has a unique ability to teach all ages techniques that will be most effective for their needs. He teaches young children his TuffTargets Anti-kidnapping program. He trains and corners for world champion fighters seen on TV and in magazines. Shawn teaches the everyday street cop arrest and control tactics and elite military units how to move and shoot. Shawn is a highly regarded coach and trainer who has designed programs for hundreds of law enforcement departments. Read more about his law enforcement training programs at www.responsetoresistance.com.
When Ohio’s law enforcement community recognized the need for an increased focus and expertise in their ground-fighting curriculum, it was Shawn who helped improve the tactics taught to each and every officer in Ohio. From 2001 to 2008, Shawn taught every defensive tactics course taught at the Ohio Peace Officer Training Academy, and many departments still enlist his instruction for new recruit training and continuing education. Currently, he is one of only a few Master Instructors in Defensive Tactics recognized by the State to certify officers as DT Instructors.
The pages that follow contain a condensed list of his credentials: